The History of the Ju 388 at Silver Hill

The Junkers  Ju 388 L-1 with the  Werknummer (= c/n)  560049, captured by US troops at the end of the war and now part of NASM's Silver Hill collection, has the code "rrx" on the manufacturer's plate. Accidentally, I came into possession of documents in the NASM archives which prove that the 560 000 series was built by Weserflug in their Liegnitz (Silesia) plant. First of all, there's a report by Mr. Brachvogel and Mr. Lantzsch, who worked for ATG, dated Dec. 6, 1944: 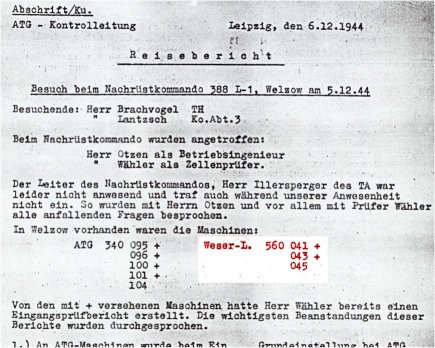 For those of you not capable of speaking German, the only important point in this document for the history of NASM's Ju 388 is the listing of serial numbers marked red. Furthermore, the FTA-Stelle beim Erprobungskommando 8-388 (consisting of Junkers employees working at the Luftwaffe unit that had to test the Ju 388) writes in its monthly report for November dated 12-2-1944:

The first aircraft delivered by ATG (Altenburg) and Weserflug (Liegnitz) gave cause for many complaints during handing-over controls. Reports were sent to FSD-Controlling and FTAB.

Farther down in the same document, there is a table giving an overview of the aircraft evaluated by the EKdo 388 in November 1944. Below that, one can find the following remarks:

When I shone around the bomb bay of the Ju 388 with a flashlight during my last visit in Silver Hill on August 30, 199, I discovered two more manufacturer's plates with Ju 188 part numbers (Sachnummern). The one on the plate in the upper half of the fuselage was 188.111, c/n 6071, manufacturer hlr = ATG, Werk Altenburg. The Ju 388's manufactured by ATG were test-flown at Altenburg, while ATG's actual production was deployed to the plants at Kölleda and Leipzig-Seehausen in December 1944. This information comes from Report No. 1084/44 by engineer A. Reichel (BMW EZA/2) dated 11/15/1944. The plate from the lower half can be seen to the left. The manufacturer's code mde stands for the Metallwerk Niedersachsen Brinckman & Mergell in Hamburg-Harburg.
Now, does that mean that our Ju 388 was re-built from a Ju 188? Certainly, a mere 188 parts number is no evidence of this, as the basic idea in building the Ju 388 was to use as many Ju 188 series parts as possible. Originally, the Ju 388 L was even called Ju 188 L. Hence, it remains to be clarified whether the fuselage of the 560 049 was a new part or taken from an existing aircraft.

Was the Ju 388 in Silver Hill ever assigned a Stammkennzeichen?

by extrapolation. However, there is no document proving this.

The history of the capturing of the 560 049 ist intimately interwoven with the history of the famous USAAF Air Intelligence (ATI) team called Watson Whizzers . This unit more or less systematically collected interesting Luftwaffe aircraft, starting even before Germany's unconditional surrender. One of the teams, coming from Halle/Saale, reached Merseburg, where, among others, a Ju 388 L-1 was captured - "our" Werknummer 560049.

Members of the 9th Air Service Squadron of the 365th Fighter Group belonging to the 9th US Air Force were ordered to examine the aircraft and make it airworthy, if possible. Crew Chief Tommy Haworth and his men found the Ju 388 L fuelled up in a Hangar. As the men suspected the aircraft to be booby-trapped, it was inspected with utmost care. They looked for explosives behind all panels and in every corner of the airplane. After that, the Ju 388 was put on jacks, and the landing gear and the flaps were tested. Obviously, the aircraft had not been fully equipped yet, because no cameras were found in the bomb bay.
In order to be able to operate the aircraft, Haworth climbed into the cockpit with an interpreter to figure out what each lever and switch was for. This job was complicated by the fact that his interpreter knew nothing about airplanes. When using the switches in the cockpit, Haworth always held his breath because he expected an explosion any time.
Finally, it seemed safe enough to start the engines, and Haworth started them, still dreading an explosion. Because the cylinder temperature reached the critical value fairly quickly, the engines had always to be shut down after a five-minutes test run on the ground.

After some test flights at Merseburg with US crews, it was decided to fly the aircraft to Kassel/Waldau on May 20, 1945. As the aircraft still bore German markings, it had to be escorted by three P-38s. The flight took place between 2:30 and 3:30 p.m., and Watson seems to have been part of the crew. The original plan was to fly the aircraft to the USA via Prestwick, Iceland and Greenland.
Eventually, the aircraft was shipped to the United States on the HMS Reaper in an operation called Sea Horse together with quite a lot of other Luftwaffe aircraft the Allies were interested in, e.g. Me 262, Ar 234, Do 335, He 219, Ta 152. For that purpose, the Ju 388 was flown to Cherbourg/Querqueville on June 17, 1945.

The voyage of the captured German aircraft across the Atlantic Ocean started in Cherbourg on July 20, 1945, and took eight days. In Newark, New Jersey, all aircraft were unloaded and continued their journey to Freeman Field by train or in flight.

The captured aircraft with the Werknummer 560049 was first assigned the marking FE-4010, which was later changed to T-2-4010. Evaluation took place in Freeman Field, where the aircraft was even demonstrated to the press in September 1945.

On September 30, 1945, the aircraft was transferred to Wright Field, whence it returned to Freeman Field in June 1946. It was kept in airworthy condition there. After the end of test flights, plans were to store the Ju 388 at Davis-Monthan AFB, but the aircraft was eventually stored at Park Ridge, Illinois, in September 1946. Eventually, the Ju 388 was moved to the National Air and Space Museum's Paul E. Garber facility in Silver Hill. As the aircraft is still in a rather good condition, it will be displayed at NASM's new Dulles International Airport facility in 2003 without prior restoration. Unfortunately, the NASM does not plan to reassemble the aircraft.

Note:  As it's illegal to show swastikas and other Nazi insignia in Germany and in order to make clear this site is in no way support of any political ideology, the swastikas in most of the photos have been removed.